My career can be divided into five parts, sometimes overlapping

-charitable, not for profit and community activities

-media, as a columnist and commentator

Teaching Fellow at various universities in Canada and USA

Professor of Management and Dean, Macquarie Graduate School of Management (21/2 years, hired as a change agent to rank MGSM as No 1 in Australia, NZ and Asia)

Spoken and lectured widely at academic, economic and business conferences as an economist, worldwide over the last 40 years

Member for Wentworth in the Federal Parliament-8 years

Shadow Minister for the Arts

Led many delegations internationally, meeting many of the world’s leaders, most notably, I was one of first western leaders to visit Beijing, post Tiananmen Square, meeting with Jiang Zemin and Li Peng, and other senior ministers; met meet with two US Presidents; and led the first Trade Mission of business and political leaders from Australia to Taiwan.

Chairman, and Founder, Osteoporosis Australia since 2000

Patron of a host of other charities etc

Other major activities, in no particular order

-Member, Fraser Government Task Force on Final Report of The Australian Financial System Inquiry, to assess and advise on the implementation of the Report

-Adviser to Tasmanian Government on banking, finance and related matters

-Member, Eminent Persons Group on Current and Prospective Economic and Social Performance in the UNESCAP Region

-The Special Advisor to the Under Secretary of the United Nations and the Executive Secretary on Infrastructure Financing, UNESCAP

Member, National Standing Committee on Energy and the Environment (Current)

I have written columns, given hundreds of speeches/lectures at conferences around the world, and appeared regularly as a radio and television commentator for nearly 35years.

Editorial Advisor, Member Advisory Board and Columnist Triple A magazine

A host of invited columns in Australian and overseas publications

By invitation or award

– Fellow, Academy of the Social Sciences of Australia (FASSA)

– Member in the Order of Australia- For service to business and economics, to the Australian Parliament and politics, and to the community. 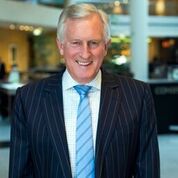