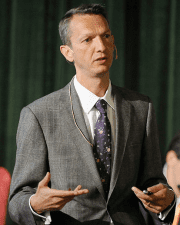 FAcSS (the Bank of England's Chief Economist and Executive Director of Monetary Analysis and Statistics) that he gave on 18th May 2016 at the New City Agenda Annual dinner.

The speech is entitled The Great Divide and it is a first class explanation of why the trust deficit really matters and why it makes sense to try to do something about it.

Please click on the blue button to access it; if you’re not convinced of its relevance to our initiative, here’s part of it:

…”The most important and compelling message the Bank received at the Open Forum came in the first session. The Bank had conducted some polling of perceptions of the financial sector – for example, by asking people what one word best described the future of financial markets. Among the Bank’s usual contacts, including those in the financial sector, the most used word was “regulated”. Many of us will have heard that message from financial insiders concerned about the perils of over-zealous regulators.

For me, the more revealing responses came from the general public, from the customers, rather than the producers, of financial services. The word most used by them when describing financial markets was a rather different one: it was “corrupt”. Not far behind were words like “manipulated”, “self-serving”, “destructive” and “greedy”. I am sure many of you have heard those messages too. They are certainly ones I have encountered frequently on my visits around the country.”…

Please click the blue button  below to access the full speech. If you need to read another piece first, here it is:

…”At least until recently many economists like me, when faced with this evidence, might have shrugged our shoulders. Social capital had no real role in our models of economic growth, unlike physical capital and human capital. Trust did not butter our parsnips and nor did it enter our production functions.

Recently, however, that orthodoxy has changed and the importance of trust has become clearer.

Evidence has emerged, both micro and macro, to suggest trust may play a crucial role in value creation. At the micro level, there is now ample evidence the degree of trust or social capital within a company contributes positively to its value creation capacity.

At the macro level, there is now a strong body of evidence, looking across a large range of countries and over long periods of time, that high levels of trust and co-operation are associated with higher economic growth.

Those social capital effects appear to be particularly potent when it comes to financial decisions. Evidence suggests that a lack of trust leads people to retreat from the stock market and banks and to move towards cash holdings and informal sources of credit, such as payday lenders and loan sharks. That jeopardises the second key benefit of finance to society – improved risk-sharing by households and companies.

So a lack of trust in finance potentially hobbles both economic growth and financial stability.

That lack of trust is the mirror-image of the perception gap between the financial sector and wider society, the Great Divide.

The Great Divide matters because it signals a pronounced and protracted erosion of social capital. It puts finance on notice for losing its social licence. And, unaddressed, that jeopardises future wealth and well-being.”…

Please click on the blue button to access the full speech. If you’re not yet convinced you should, here’s a final snippet:

…” As a survey in 2013 of financial professionals found, rather remarkably, that over half believed their competitors engaged in illegal or unethical behaviour.  A smaller, but still high, fraction of 24% believed their own company engaged in such practices. Similar percentages believed their industry did not fulfil its fiduciary function of putting clients’ interests first.

The significance of these findings is not the precise percentages, as striking as these are.

More fundamentally, it is because of what they reveal about finance’s perception of itself, the mirror it holds to the social identity of finance.”…

Click onto the button below to access the full speech; you’ll be glad you did, it’s profoundly thought-provoking for anybody interested in the future of the financial services industry: