There has been widespread criticism of the Business Banking Resolution Service (BBRS).

These two articles provide an initial feel for its issues:

The BBRS was set up ostensibly to resolve historic banking disputes, but it is a terrine failure.

It cost more than £33mn to the end of last year and its chief adjudicator had earned £976,000, substantially more than the Prime Minister and yet, it had made only a handful of awards.

The BBRS was devised following the Walker Review in November 2018 by the former Chief Executive of the Financial Conduct Authority, Andrew Bailey and HM Treasury, supposedly to compensate the victims of serious banking misconduct and fraud.

In October last year, the BBRS stated that “eligibility conditions in the scheme rules were unanimously approved in February 2021 by the Implementation Steering Group comprising seven bank representatives, eight (from) SMEs and an independent Chair”.

Numerous leading figures, who were engaged to administer the BBRS, have resigned. Within two months of its launch in February last year, the Chief Executive, Samantha Barrass had left. Along with Peter Taylor, its director of legal affairs and policy, she had continued to be embroiled in a court case involving her previous post at the Gibraltar Financial Services Commission. Within a short period, Peter Taylor had also departed and questions were asked why, if proper due diligence had been done, Barrass and Taylor were engaged in the first place.

Following the launch of the scheme, the BBRS held a series of webinars to inform applicants of its intended process. These were led by their director of communications, Jon McLeod but soon, he too moved on. Recently, the chief adjudicator, Alexandra Marks resigned.

A lawyer on the SME liaison panel, Cat Maclean also recently stood down, describing the BBRS as “completely defective” and worrying that if she remained, she was in danger of “being complicit with a cover up”. Those who resigned may have been deceived into believing that the scheme might deliver a greater degree of compensation than has proved to be the case.

This is a not-to-be missed event for: 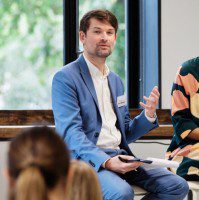